But there’s an upside to this heavy downside. Some of the best stocks on the market have taken brutal haircuts for all the wrong reasons. To me, that looks like a wide-open buying window. Buy low, sell high. Be greedy when others are fearful. Buy on the dips. You know the drill. Those old platitudes have staying power because they hold more than a sprinkle of truth.

So I’m basically drooling over this drooping market. In particular, I have to recite the Fool’s disclosure policy five times and take a cold shower every time I think about Netflix (NFLX -3.92%) or Coinbase International (COIN -2.15%). Otherwise, I’d be foaming at the mouth while slamming the “buy” button for these stocks.

I’m not joking. These two stocks are no-brainer buys right now, and here’s why.

One glance at a recent Netflix chart would have you believe that the company is about to declare bankruptcy. The stock trades more than 70% below last November’s all-time highs, including a 65% year-to-date plunge. The bears are laser-focused on Netflix’s stalled user growth, which is projected to continue in the current quarter.

And I get it. The long-term subscriber growth has been choppy in recent years, and it kind of looks like Netflix has reached its peak membership count by now. It’s all downhill from here, right?

I don’t expect Netflix’s subscriber additions to stay weak for very long. You’ll notice a few similar flattening hiccups in the chart above, all around the same couple of quarters of each year. People are jumping to long-term conclusions based on an amplified seasonal trend. In the long run, Netflix is staring down a massive addressable market of current and former cable/satellite/broadcast TV households and movie theaters. Digital streaming will eventually replace its old-school peers and the sea change is still in its early innings. 220 million subscribers may sound like a lot, but not in the context of 1.7 billion households worldwide.

At the same time, you can’t boil Netflix’s business prospects down to just subscriber additions. The company is also raising prices, contemplating new services, and planning to monetize viewers who currently use someone else’s account. As a result, top-line sales and earnings before interest, taxes, depreciation, and amortization (EBITDA) are surging even if subscriber growth is pumping the brakes. Netflix is selling at a huge discount to its earnings power right now, and I think it’s silly not to take advantage of this buying opportunity: 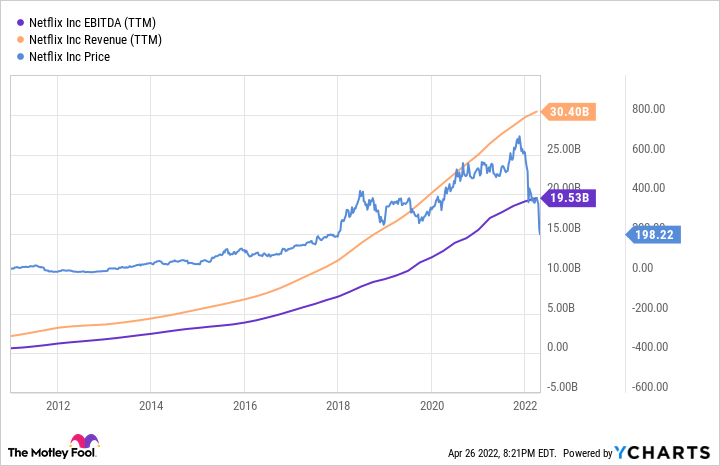 Coinbase is only getting started

Coinbase’s market value is closely correlated to the leading Bitcoin (BTC 1.08%) cryptocurrency. When Bitcoin rises or falls, Coinbase tends to follow suit. This connection is much stronger than Coinbase’s correlation to the stock market in general or to an index of financial services stocks.

Bitcoin has been a volatile asset this year as the regulatory picture remains unsettled for cryptocurrencies everywhere and investors don’t quite dare to trust digital currencies yet. And since Coinbase is a recent addition to the stock market with just one year of public operating history under its belt, the trading service’s stock has fallen about twice as fast as Bitcoin in 2022.

That would be all right if Coinbase’s financial fortunes really were tied directly to the swings in Bitcoin prices, but that isn’t the case at all. In February’s fourth-quarter report, Coinbase’s full-year revenues skyrocketed from $1.1 billion to $7.4 billion. Earnings multiplied many times over from $322 million to $3.6 billion. The company had 2.8 million monthly transacting users at the end of 2020 and 11.4 million active customers one year later.

And these results often leave Wall Street’s expectations far behind. That fourth-quarter report, for example, exceeded your average analyst’s earnings target by 79% alongside a 31% outperformance on the revenue line. Oh, and Coinbase shares are changing hands at just 9.5 times trailing earnings and 2.9 times free cash flows — bargain-bin valuations in any sector, and a downright ridiculous discount for this high-octane growth stock.

You see, Coinbase doesn’t really care much about the price of any particular cryptocurrency. The company makes a mint from trading fees, so a cryptocurrency market meltdown is just as valuable as a skyrocketing crypto sector. Either way, people are trading lots of coins and tokens.

At some point, market makers will have to get over their obsessive connection between the prices of Bitcoin tokens and Coinbase shares. When they do, you’ll thank me for recommending Coinbase at these ultra-low prices.